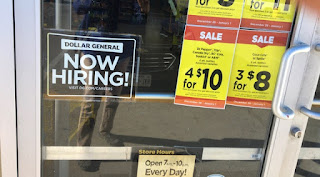 [Photo: One of many stores in El Paso seeking workers/DZN]
EL PASO, TEXAS -- El Paso's economy is in one of its best times ever despite the challenges presented by the coronavirus. The unemployment rate fell to 5.3 percent in October, compared to 7.3 percent for the same month last year, according to the Bureau of Labor Statistics [1].

Companies have resumed works that had been delayed, and companies like Amazon chose this city to build their distribution centers. Universities, medical centers, medical schools and the military post carry out collaborations that are generating far-ranging economic benefits.

The average wage reached up to $15 an hour [2], while the cost of living remained lower than in other Texas cities like Austin. Wherever you go, you come across businesses with signs requesting workers.

These advantages also attracted many people from other states, primarily California, to El Paso, according to local real estate agents, contributing to a housing shortage and the increase in the purchase and rental of homes and apartments.

Residents received considerable relief funding in 2020 and 2021, from the government, to deal with the crisis caused by the coronavirus, but most of this is about to end. This means that, many people who weren't active in the labor market will need to go back to work.

As elsewhere, the city is experiencing shortages of some products and materials, which affect border businesses.

What could hurt the local economy is inflation. Inflation is skyrocketing alarmingly, something that could erase the gains. Because of this, the possibility of another recession like that of 2008 cannot be ruled out.

According to several economists, the U.S. Federal Reserve Bank holds the key; it can make things better or worse, depending on what policies on interest rates and money distribution to banks it pursues in the coming year.

This how we find ourselves at this time.

Happy New Year to all!

Diana Washington-Valdez is an international author-journalist and analyst based in El Paso, Texas. Facebook.com/thedigiezone/ TheDigieZone.Com / marcopolo360.blogspot.com (Spanish); also, on LinkedIn

Recommended reading from Politico: The Fed’s Doomsday Prophet Has a Dire Warning About Where We’re Headed - POLITICO

Political violence is raging in Mexico

Diana Washington Valdez
Guest columnist/El Paso Times
Published 6 a.m. MT June 11, 2021
Running for office in Mexico’s recent midterm elections meant having to dodge bullets, dying in ambush-type attacks, or being forced to resign after receiving death threats.
A May 9 photograph by Marco Ugarte for the Associated Press shows Guillermo Valencia, a mayoral candidate in Michoacán, putting on a bulletproof vest before hitting the campaign trail. On May 25, mayoral candidate Alma Barragan, 61, was shot and killed while campaigning in Guanajuato.

Mexican citizens went to the polls June 6 to elect hundreds of candidates – the ones that survived with their lives intact - to federal, state and local positions. According to Etellekt Consultores, a consulting firm, the country just experienced one of its most violent election seasons in modern times.

Relying on open sources, Etellekt found 910 reported attacks between Sept. 7, 2020, and June 5, 2021, ranging from verbal threats to physical attacks and murders against candidates, officeholders, their relatives, and associates. A total of 91 politicians were assassinated.

Candidates from various parties were targeted, so mere political rivalries cannot explain this wave of political violence. Over the past two decades, the people of Mexico elected presidents from three different political parties, and they complained each time of disappointing results.

Besides politicians - numerous activists representing myriad causes, police and judicial officers - also were targets. Added to this are the relentless murders and abductions linked to organized crime (misnomer for drug-trafficking cartels).

The nonstop horror created by these brazen attacks seriously undermines Mexican democracy. The response by President Andres Manuel Lopez Obrador has been tepid at best. Who is killing these people? Security experts cited in news media accounts assert that drug cartels are involved. Apparently, criminal organizations select their preferred candidates and knock out the opponents. They act as proxies for politicians who want to remove rivals without getting their hands dirty.

Everyone knows the majority of these crimes will go unpunished, which contributes to the erosion of democracy. Obviously, the Mexican government cannot guarantee the safety of men and women that merely want to make their cities, states, and nation better.

Will we see more attacks, perhaps against the candidates who managed to get elected? If so, they could be forced to join the thousands of migrants fleeing violence in Mexico and Central America. They will have a good case if they apply for asylum in the United States.

Lopez Obrador is touchy when it comes to criticism about the widespread security issues that plague Mexico. Still, it is an issue that the United States cannot afford to ignore. U.S. Vice President Kamala Harris likely was briefed on these matters ahead of her meeting with Mexico’s president this week.

In 2008, the U.S. Joint Forces Command released its “Joint Operating Environment (JOE)” report warning about Mexico’s potential collapse. "The Mexican possibility may seem less likely, but the government, its politicians, police and judicial infrastructure are all under sustained assault and press by criminal gangs and drug cartels,” the JOE report stated.

“How that internal conflict turns out over the next several years will have a major impact on the stability of the Mexican state. Any descent by Mexico into chaos would demand an American response based on the serious implications for homeland security alone."

Mexico is closer today to that precipice than it was when the JOE report first came out.

Going forward, the good people of Mexico deserve much, much better from their leadership.

Diana Washington Valdez is an international author-journalist based in El Paso, Texas, and a former El Paso Times staffer.

Book on Gulf War Syndrome in paperback and digital editions

Aug. 27, 2021
New release of the book "Shadow of Death: Gulf War Syndrome" by author-journalist Diana Washington Valdez. Available on Amazon at Book on Amazon
"The book is timely in light of the current pandemic we are experiencing," Diana Washington Valdez said. "Concerns about weaponized viruses and bacteria surfaced 20 years ago."
"Yesterday's conspiracy theory is tomorrow's truth."
It is now available through Amazon as a paperback or ebook. 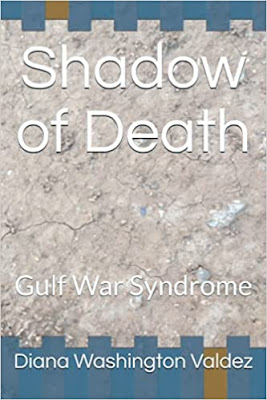 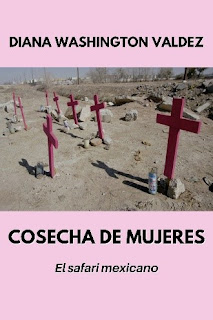 From the Digie Zone Network gallery


Listen to the KTEP interview here Recording of radio interview with Louie Saenz, host of "The Weekend" program. It aired November 25, 2017

Dusty sandaled feet,
Darkened faces seared by sun,
Hands scarred by thorns,
Wounds and overuse;
The arrow of death flung
Stilled Cesar’s soul today,
Stunned farm workers
Gather, stare at one another,
Arrayed in stony disbelief,
In unbearable quiet silence;
Their stout hearts crushed;
Their hot tears and mine combine,
A river of grief begins to flow,
Watering the soil across the land,
From the grape yards of California,
To the apple groves of Pennsylvania.
The man who sets souls on fire,
yields his body to the field.
By Diana Washington Valdez
[Cesar Chavez died April 23, 1993. He and
Dolores Huerta co-founded the
United Farm Workers Union.]
on July 15, 2017 No comments:

International fashion and style over time

My fashion sense over the years ...

If someone asked me if I have a sense of fashion, then I would have to say probably not. If it's a matter of style, which is personal and subjective, then yes, I have that and so does everyone else.

Recently, I read that we ought to determine and let everyone know what our "uniform" consists of, especially in case of becoming accident victim or dying unexpectedly. What could we be known for wearing that would help others to identify us quickly and positively?

After giving it some thought, I decided that blue denim shirts are my favorite thing to wear. My next favorite, for dressier occasions, are Asian-style jackets, like the one in the photo at left. I own two other such jackets that I will be glad to show off in later photos.

I never was the most informed person when it comes to fashion. This was more than evident when friends in Los Angeles told me that Dolce and Gabbana was a major sponsor of an event with Hollywood people that was going to include an excerpt of Lorena Mendez-Quiroga's film, "Border Echoes," in which I appeared. I asked the friends, 'What is Dolce and Gabbana?' They paused for a moment, and one of them politely responded, 'a fashion designer.' I went home later that day and mentioned this to a teenage niece, Rebe (pronounced ReeBee). The niece laughed at me, and said she had Dolce and Gabbana shoes.

Another time, I bought five identical shirts because I fell in love with the plaid pattern and soft pink and green colors, a combination I also use to paint walls and for bedding. For four days in a row, I wore a fresh pink and green identical shirt to work. I did not wear another one on the fifth day because I realized the night before that my fellow workers probably thought I was wearing the same shirt every day. No one said anything to me, but I can imagine what others in the newsroom were thinking.

There was another occasion when my fashion sense was challenged. I got up for work one morning, and I got very dressed up. I looked in the mirror and thought I was perhaps too dressed up. I headed to the car and after I opened the door to get in, I changed my mind and went back inside the house. I proceeded to "dress down" a bit. After that, I felt comfortable with myself and drove on to the office.

I must say that my mother, who lived next door, could see me leave the house from her front yard while she watered her garden. I caught her once nodding her head after waving goodbye to me, and after checking out my 'wardrobe.'

The first time I was going to be on television, for an election-related panel, I knew better than to trust my fashion instincts. I sought my sister Maria's advice on what to wear. Maria was very attractive, and always dressed up. She was a head-turner when it came to the guys.

She looked in my closet and picked out several items. I was to call the TV studio beforehand to ask what color background the studio was going to use. What my sister picked out for me to wear that day was perfect.

I've lost count on the number of international TV and other film documentaries I've appeared in over the years. None of them portray me as glamorous. Fortunately, my mother hasn't seen most of them .... You have to figure that my idea of clothing is limited the "Basic Editions" line sold in Kmart stores. For example, I would go into the store, pick out five of the same items in the same size, except in different colors.

That doesn't mean I don't possess a style of my own; actually, it varies depending on my mood and the occasion. At the top left, is a picture of me that was meant to display a "chola"  look, although others commented that I looked more like a "biker." I couldn't find any fake tattoos in stores to finish the look, but maybe next time. Whatever. I thought it was pretty cool myself. I will post other "looks" in the future. In the meantime, consider what it means to develop your own style, and don't be afraid to experiment ....